Welcome to the wiki! We’re a collaborative community website about your topic that anyone, including you, can edit. Click the edit button at the top of any page to get started!

Special Sisters Wiki is a collaborative website about Special Sisters created by Dýmapko. The wiki format allows anyone to create or edit any article, so we can all work together to create the site. Check out the FAQ to help you get started!

Special Sisters is a series created by Dýmapko which is about two sisters, Kimberly and Karla, from a Teremedosian city named Bàrcinon. He show has four seasons of eight episodes each season. The third season introduces new characters, now the main characters are two new human sisters: Mila (Milagros) and Melina (false name). 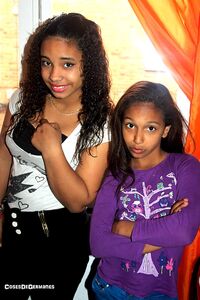